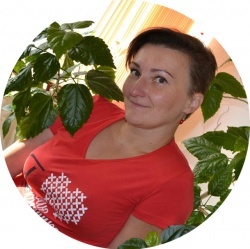 Anna is one of the most experienced Russian cross stitch designer, she creates charts since 2012.

She has an education as an artist-designer, so many of her charts based on her own illustrations. Anna also collaborates with modern artists, offering you a large assortment of charts based on watercolor illustrations. For several years Anna worked in a company that produces cross-stitch kits, which undoubtedly affected her work. Anna tries to make her charts comfortable for stitchers, achieves the most beautiful result with a minimum of colors and complicating elements. Anna believes that in embroidery it is important to get not only a good final result, but also a pleasure from the process itself. Therefore, in addition to careful study of the design, Anna creates charts in several versions - a chart in color and black and white version, as well as a chart with and without backstick. When you buy, you get all the options of the charts.